In July 2020, Pacific Link Housing received funding from the NSW Government’s Together Home project – the largest housing response dedicated to rough sleepers in the state’s history.

“Part of this initiative is about finding people a place to call home, but the critical next step is supporting them with the services they need improve their health and wellbeing, and to rebuild their lives,” Mr Ward said.

Pacific Link Housing Chairman Wal Edgell said that the devastating economic impact of COVID-19 has highlighted the importance of investing into social and affordable housing to break the cycle of disadvantage.

“It is encouraging to see the NSW Government acknowledge that community housing providers, such as Pacific Link, are integral in providing solutions if we are realistic about ending homelessness in this country”, Mr Edgell said.

Pacific Link Housing CEO Ian Lynch said the organisation has had many successful outcomes accommodating tenants who were previously homeless. Homelessness Week, which runs from the 2nd August 2020, provides an opportunity for organisations like ours to share their success stories.

Brett was a glazier with 47 years in the trade. He loved his job and took immense pride in his work. After working for 15 years with the same employer, a change in management unfortunately resulted in Brett losing his job. “It was a good job and a good crew. I thought I would retire there. Life was good”.

Brett had some savings put aside and invested in a farm with a friend. Their plan for an early retirement fell through and they both lost their home and hope for the future. That is when he found himself homeless.

Brett spent five years sleeping in his car at various location including a commuter carpark where he became the unofficial caretaker of the area. “I kept the area spotless and decided that if I was living in my car, I wanted to leave something behind”. So, Brett decided to build a garden next to his car filled with ruby red geraniums and sandstone blocks.

With encouragement from Baptist Care, Brett was referred to Pacific Link and we were able to offer him a home just before Christmas. He refers to his one-bedroom unit as a penthouse. “I was so happy and emotional when Pacific Link told me I could stay here forever. I bought a big bunch of flowers and chocolates to the staff. You really appreciate what you have after being homeless”.

“The NSW Government’s Together Home program is a fantastic opportunity for community housing providers to combine forces and provide lasting outcomes and a brighter future for those who are experiencing homelessness,” Mr Lynch said. 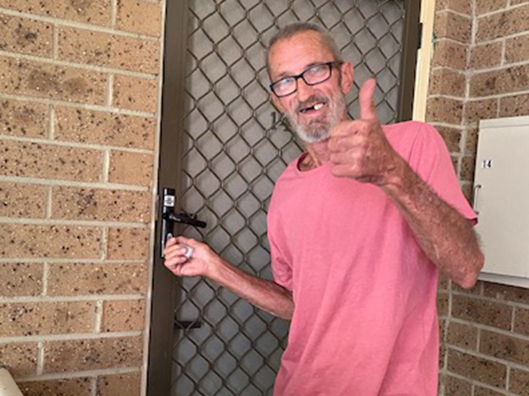